Honorary members of the Academy of Internal Medicine for Veterinary Technicians are individuals that have made major contributions to the advancement of technicians in the field of veterinary internal medicine.  AIMVT is proud to include the following individuals in our membership. 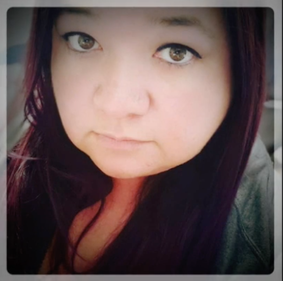 Melissa Malcolm
Melissa Malcolm ("MC") was a technician at BluePearl Levittown from 2006-2022.  She came from a busy general practice, started in the surgery service, and transitioned to the neurology service. If there was downtime, you could find her teaching herself or her team. The things that her co-workers value most about her is her ability to teach almost anything and the fact that she was a fierce patient advocate.  She applied and was accepted to sit for the VTS exam with her co-worker Christine.  They did it together.  She would be so proud to be an honorary VTS as this was her next career goal. She had a great team ethic and worked hard to pass on the knowledge that she had about advanced imaging and patient comfort.

When not at work, you could find "MC" saving animals that needed special attention.  Her farm was lovingly called the Funny Farm and you could find anything from a one-eyed duck to a calf that she rescued from the slaughterhouse auction and nursed back to health.

AIMVT is pleased to award the AIMVT Gives Back donation to support the Funny Farm in MC's honor. 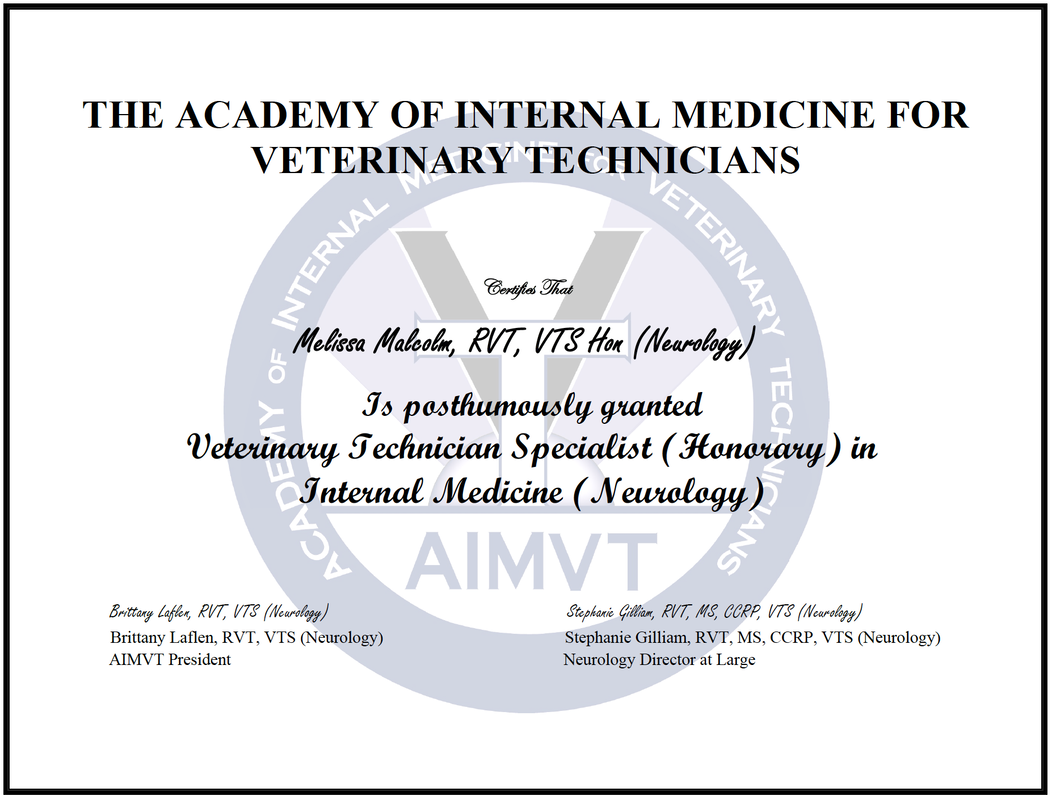 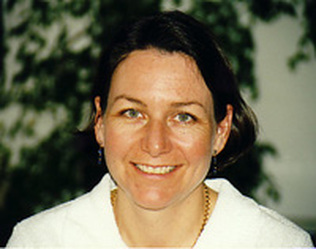 June Boon
Ms. Boon is currently a staff member at the Colorado State University Veterinary Teaching Hospital in the cardiology service.  For the past 25 years Ms. Boon has had an illustrious career in cardiology, fulfilling roles of echocardiographer, educator, author and researcher.  She has performed many duties in the cardiology service including performing echocardiograms for the faculty cardiologist. In addition to her clinical duties, Ms. Boon has been providing continuing education seminars for veterinary technicians and veterinarians since the mid 1980’s.  She is a lecturer for the veterinary students at Colorado State University and has been a course instructor at the Front Range Community College for Human Anatomy and Physiology, and Cardiology for the Veterinary Technician program.

Ms. Boon brings unique experience and knowledge to the AIMVT.  Her interest and knowledge in ultrasound coupled with her commitment to veterinary cardiology define her honorary membership.  Her contributions to veterinary cardiology are unequaled by any veterinary technician anywhere.  For AIMVT to proceed without including Ms. Boon would be missing an unparalleled opportunity.  Her expertise in echocardiography and ultrasound is not only useful to the Cardiology section of AIMVT but is a valuable resource for the Small and Large
Animal Internal Medicine sections, in addition to a Radiology section, should that be added to AIMVT in the future. 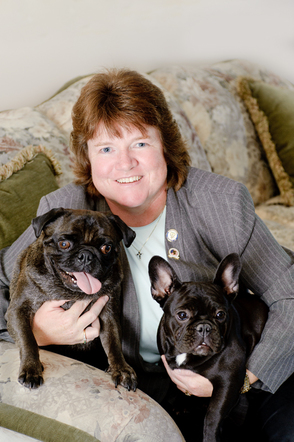 Kara Burns
Kara Burns is a licensed veterinary technician originally from New England, now living in Kansas.  She holds a master’s degree in physiology and a master’s degree in counseling psychology.  She began her career in human medicine working as an emergency psychologist in the Maine Medical Center emergency department.  She also worked at Maine Poison Control as a poison specialist dealing with human and animal poisonings. She then made the move to veterinary medicine and worked in small animal private practice and a small animal and avian practice in Maine. Currently, she works for Hill’s Pet Nutrition as the veterinary technician specialist working with the graduate technician profession in all aspects – National association, State veterinary technician associations, specialty associations, and national, regional, and specialty conferences.

She has authored many articles and textbook chapters and is an internationally invited speaker, focusing on topics of nutrition, leadership, and technician utilization. Ms. Burns has been featured on the cover of the Veterinary Technician Journal and the NAVTA Journal. She was the 2010 NAVTA Veterinary Technician of the Year, as well as the 2011 Dr. Franklin Loew Lecturer.  Kara has also been named the National Association of Professional Women ‘Woman of the Year’ for 2010-2011 and the Cambridge Who’s Who in Professionals V.I.P. for 2010-2011.
​
She enjoys spending time with her wife Dr. Ellen Lowery and their children. They are actively involved in youth sports, 4-H, school activities, and church ministry. The family also includes three horses, two sheep, 2 pugs, a French bulldog, 4 birds, 5 indoor cats, two roosters, and a bearded dragon! 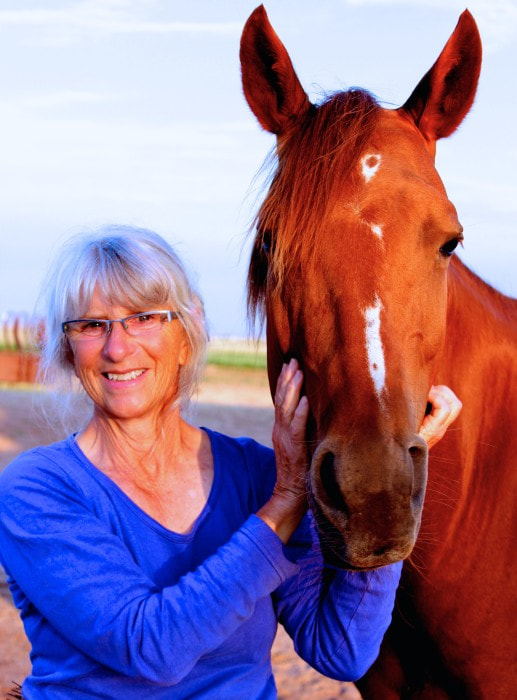 Mary Lafferty
Tribute to Mary H Lafferty, CVT for all that she contributed to the field of veterinary oncology.

Around the age of 40, Ms. Lafferty started her second career as a veterinary technician after graduating from the Bel Rea Institute of Technology. She quickly became a staple around the Colorado State University (CSU), Animal Cancer Center (ACC) with her willingness to become what was known as the “bone nurse”. Mary’s contributions to the ACC and veterinary oncology can still be felt in the community of the cancer center and it’s also seen in her numerous direct contributions to publications and the education of others. Over the 28-year career Mary had at the ACC, she co-authored 18 refereed papers relating to veterinary oncology, with most of these publications coming from her participation in surgical limb sparing procedures and osteosarcoma research. She also interacted and assisted with more than 50,000 clients, helped teach technical skills to approximately 4,000 fourth year veterinary students and contributed to training over 100 interns, residents and fellows. Ms. Lafferty was an enormous figure in the culture, presence, and leadership within the ACC at CSU. Her legacy is a rich one filled with compassion for her patients, wisdom and knowledge for her students and a commitment to advancing the science of veterinary oncology. Mary gave of herself unselfishly and her absence has left a huge void at CSU that will not likely ever be filled.

Dr. Steve Withrow states “Mary was rock solid and unassuming”. She was named on numerous refereed papers, established the data base for sarcomas at CSU, developed anesthesia and chemotherapy strategies for technicians, assisted in bone harvesting, all the limb sparing procedures, and the development of the bone bank. Mary’s contribution to the development of the limb spare procedure was only a small part of her everyday adventures at the ACC. She was also involved in designing the cisplatin hydration protocol, which started at hydrating animals for 8 hours prior to platinum infusion and through her contribution, was able to reduce the time to about 2-4 hours. Mary was also only one of two technicians that kept the ACC running. Her everyday duties included taking in patients, performing and submitting diagnostics, running anesthesia and sedations, administering chemotherapy, carrying out clinical trials, educating clients and so much more. Later in her career, Mary became an integral part of the ACC’s client support team. In addition to calling clients and referring veterinarians for follow up on patients to keep the bone cancer database up to date and accurate, she also fielded thousands of phone calls that offered support, guidance and an ear to listen. Often, Mary was able to answer questions and concerns in a timely manner that would free up many hours for the doctors.

Mary’s devotion also reached far beyond the walls of the veterinary hospital. Ms. Lafferty was active in “The Youth and Pet Survivors Program” (YAPS©). The program is a collaboration between young adolescents being treated for cancer at the Denver Children’s Hospital and canine cancer patients at the ACC. The children and their parents partake in a pen-pal letter to the canine patient and in return, the owner of the dog would respond to the child. It is a way to give hope to children fighting cancer and knowing beloved dogs were receiving similar treatments. She loved this opportunity to be involved in community activities to help bring canine cancer and human cancer together in a positive way. Another avenue for her largess was the Limb Preservation Foundation (LPF) that published an annual calendar featuring one human who benefited from the LPF and one osteosarcoma canine patient treated at the ACC.

Lindsay Carroll, VTS (Oncology) writes, accepting Mary as an honorary VTS member would be a recognition of her devotion to our specialty, as she was fundamental in advancing veterinary oncology. She left a legacy which is embodied in the research she participated in, many thousands of hours she spent at the hospital, and the copious number of students, technicians and doctors she inspired and mentored. I firmly believe that Mary’s contributions, passion, and love for oncology surpasses my ability to submit an application and pass a grueling test in order to become a Veterinary Technician Specialist in oncology. Mary possessed a tremendous amount of skills and knowledge of oncology, which she was generous enough to bestow on the next generation of oncology nurses, myself being one of them. During my almost two years I spent putting my application together and taking the boards exam, Mary was nothing but supportive, happy, and delighted that I was choosing to pursue my passion in oncology. Deep down I know that if circumstances had been different for her back in the day, she could have been one of the first technicians to achieve her VTS in oncology.

Stephanie, her daughter wrote, Mom loved her job and all the people involved. You all were her world. I am very proud of her accomplishments. She was a humble person, and never made any fuss out of her achievements. She talked about her studies, and loved talking about her work, but I had no idea of all that she accomplished.

It is AIMVT’s privilege to posthumously grant her an honorary VTS in AIMVT (Oncology). 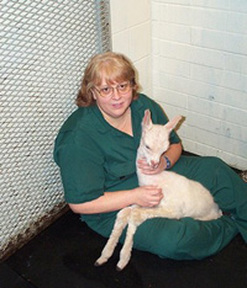 Her primary job since graduation was at an equine referral center in Washington State where she was employed as a veterinary technician and administrator.  Demonstrating herself to be an exceptional veterinary technician, she was the recipient of several “Above and Beyond” awards from her employer.  She also provided and/or wrote many of their in house continuing education programs and wrote a major portion of their Large Animal technician’s training manual.​

Julie Wakefield joined AIMVT as a Large Animal Technician in 2005 during the expansion of the Organizing Committee.  She provided input on all the activities of the Academy throughout 2005 and 2006 until her health prevented her from doing so.

Ms. Wakefield made major contributions to the advancement of veterinary technicians throughout her life.  She was the epitome of the diligent student while achieving two degrees in the field of animal sciences.  She continued to rise in the profession of veterinary technology emerging as a leader in Large Animal care at the premier equine referral center in western Washington.  Finally, she took the next step and pursued Veterinary Technician Specialty status, not by waiting to sit for the examination, but by volunteering for the harder road of sitting on the Organizing Committee.  Throughout her career she demonstrated that she had a passion for advancing veterinary technicians in general and for the profession as a whole. It is a tribute to have Julie Wakefield as an honorary member of AIMVT – Large Animal.